As seen on the Guardian 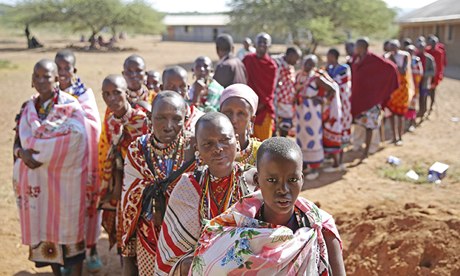 Struggles over land rights have emerged as one of the foremost social and environmental challenges across much of Africa. Tanzania has been the focus of one of the most widely publicised land-grabbing cases over the past year.

The case revolves around Masai communities living in Loliondo, just east of the world-renowned Serengeti national park. A land tenure conflict has simmered there for the past 20 years as a result of the government’s allocation in the early 1990s of the area for use by a foreign hunting company, an action that did not take account of existing community land rights and uses of the resident Masai.

The result has been years of conflict over access and use of land and other resources, when the interests of the hunting company come into conflict with the resident communities’ traditional livestock grazing practices and other land uses.

In 2009, the dispute resulted in a government operation to evict several hundred Masai households from the area, which led to national and international media coverage and criticism from human rights groups. The conflict flared again in March of this year when Tanzania’s minister for natural resources and tourism announced plans to convert 150,000 hectares – about 40% of the Loliondo area, including nearly the entire territory of six Masai villages – into an exclusive reserve for wildlife, which would have legally required the eviction of up to 20,000 people.

This latest phase of the conflict attracted even more global media coverage, and has become a flashpoint for the growing debate around land rights and different models of economic development in Tanzania and Africa more broadly. The communities, supported by a range of Tanzanian civil society organisations, mobilised to defend their lands through a range of political and legal interventions.

At the end of September, in response to these efforts, Tanzania’s prime minister, Mizengo Pinda, visited Loliondo and announced a reversal of the earlier move by the natural resources and tourism ministry, stating that the land belonged to the communities and there could be no eviction of the resident Masai.

This appears to be an extraordinary victory for a remote and marginalised rural community. The Loliondo case, with all the publicity it has garnered – including a campaign by the online activist organisation Avaaz that has attracted some 2 million supporters – serves as a window into the wider struggle over lands and resources taking place across Africa. As such, a number of important lessons emerge from the way this case has played out over the past six months.

Perhaps the most remarkable aspect of the Loliondo episode has been the alignment of local and national civil society organisations within Tanzania, combined with influential supporters abroad, behind the communities’ struggles.

The international media coverage in support of the communities’ land and human rights has been remarkable. Few communities in Africa have been able to attract media coverage and the global public’s imagination as Loliondo’s Masai, but nevertheless the case highlights the potential for these local-global networks to greatly enhance the voice of local people and their leverage in domestic policy negotiations.

The networks that link local communities in rural Africa to wider networks of global supporters depend on the transformational role of information technology. Not only local NGOs, but many herders and farmers in areas such as Loliondo own mobile phones, and increasing connectivity allows enhanced communication and transmission of information, including photographs and video evidence. As a result, external support for the communities in Loliondo can be mobilised in days, whereas a few years ago it might have taken weeks.

Women have helped lead the way. Masai society is known for being a male-dominated society, but women are beginning to assert their rights and assume a greater social leadership role. On land issues, Masai women in Loliondo have been at the forefront of generating community-level mobilisation and solidarity, many walking dozens of miles across the bush to assemble the community for demonstrations and meetings.

Although Tanzania has faced heavy criticism by global media over the Loliondo affair in the past six months, two points crucial to the outcome of the case have consistently been overlooked. First, Tanzania has one of the most progressive land laws in the continent in terms of safeguarding communities’ customary rights, and it is the fact that the Masai in Loliondo possess documented rights to their land that has enabled them to make their case effectively.

Second, Tanzania is an increasingly vibrant, if nascent, multiparty democracy where, unlike some other African countries, citizens have the opportunity to be heard by, and also to sanction, their elected officials.

The national elections are scheduled to take place in two years, a fact that encouraged leaders to listen to community grievances. This highlights the fact that throughout Africa and elsewhere, struggles over land rights are inevitably tied to the broader terrain of democratic governance in which they take place.

From Rhetoric to Action: Day 2 report