Bern lies on the Swiss plateau about 20 km north of the Bernese Alps. The Federal Capital of Switzerland, Bern is home to more than 300,000 people and is easy to reach by all means of transportation.

Booking your flight to Switzerland

How to get to Bern from:

During the daytime several Trains depart from the Zurich airport for Bern every hour. Train frequency is less in the late evenings and early morning hours. Total travelling time is approximately 1h 15m.

Outward-and-return tickets are valid one month.

Outward-and-return tickets are valid for one month.

Outward-and-return tickets are valid for one month.

How to get to the Conference Venue (Kursaal Bern) from Bern Rail Station: 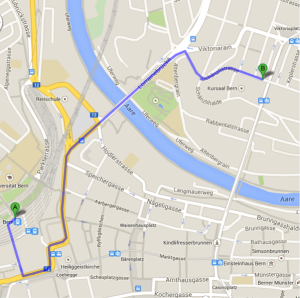 Accommodations within walking distance of the conference are listed below:

Refer to the list below if to determine if you need a visa to enter Switzerland:

If you need a visa please see this site for more information.

Your visa application should be made to the Swiss consular authorities in your country. Addresses of all the Swiss representations/consular services outside Switzerland can be found here.

An official invitation can be sent to the participants on demand (contact: claudia.greco@helvetas.org). Participants are encouraged to begin their visa application process as early as possible – at least 6 weeks in advance to ensure processing is completed in time.

The conference will take place at the Kursaal Bern (Kornhausstrasse 3, 3000 Bern) in Bern. It is situated slightly east of the Aare River, 1.5 km walk from Bern’s main rail station. Several hotels are within a 15 – 20 minute walk of the conference location.

Gratuity for services provided is already included in hotels, restaurants, and taxi bills. For special services, a small tip is of course welcome.

Bern is located in the German-speaking region of Switzerland. Aside from German, most Bernese speak both English and French.

Bern has many banks able to exchange money. At both the airport and main rail station money can be exchanged for a nominal fee. Most hotels also exchange money, but usually at higher rates. Credit cards (Visa, Master/Eurocard, and American Express) are generally accepted in most hotels, restaurants and shops.

Exchange offices at the stations are open until 8 pm.